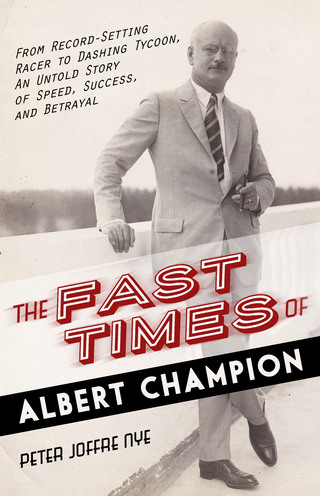 "This first biography of the AC Delco and Champion Spark Plug founder gives a glimpse into the advent of modern transportation in the Jazz Age through the story of a man who lived in the fast lane."
—MICHIGAN HISTORY MAGAZINE

“[The] story you can't believe you've never heard before involves Albert Champion…. a record-setting bicyclist and motorcyclist in his native France, then a daredevil race-car driver, and eventually a pioneering tycoon in the American automotive industry…. [His] tale is worth being told…. A diamond-in-the-rough compelling read.”
—LIBRARY JOURNAL

"The narrative peers inside the early, kicking days of the car business, punctuated with the likes of Louis Chevrolet and Champion's short-time boss, Bill Durant. This is an overdue work."
—HEMMINGS CLASSIC CAR

“One of the 10 Best Cycling Books of 2014. Champion, who won Paris-Roubaix in 1899 and, after his cycling career ended, found fresh fame in the auto industry through spark plugs that even today bear his name.”
—FEARGAL MCKAY, PELOTON MAGAZINE

“In The Fast Times of Albert Champion, the first biography of the legendary founder of ACDelco and Champion Spark Plug, Peter Joffre Nye uncovers the remarkable and important story of the Jazz Age celebrity/daredevil and devilish genius from Paris who made his fortune in America and cavorted with Lindbergh, Durant, Chevrolet (and Chevrolet's wife)—and died mysteriously like he lived, in the fast lane.”
—MICHAEL CAPUZZO, author of the New York Times bestsellers Close to Shore and The Murder Room

“Albert Champion may be largely forgotten, but he seems to have been everywhere at a time when the world found new ways of fast transport—racing bicycles and motorcycles and cars—and then, after somehow outriding death, he became one of the most successful entrepreneurs of the wild new automobile industry. Bon vivant, a charmer, even a bit of a scoundrel, Champion is brought wonderfully to life by Peter Nye in an engaging biography of the man who lived up to his name, speeding through life on and off the track.”
—FRANK DEFORD, author and sports commentator on NPR’s Morning Edition

“Albert Champion’s life gives us a view of our history that is full of surprises and highly entertaining to boot. Nye knows how to transform treasure troves of historical detail into a gripping story set in a brilliantly illuminated period of American life—when the bicycle was the icon of glamour and speed.”
—SUZANNAH LESSARD, author of The Architect of Desire

“Automotive history is rife with stories of men from modest working class backgrounds without the benefit of formal education who rose to achievement and wealth by a commitment to hard work and an instinct for opportunities. Henry Ford, Walter Chrysler, Charles Nash, Adolphe Clément, and William Morris are a few…. Albert Champion must be considered as one of those.”
—ARTHUR JONES, Society of Automotive Historians, SAJ Journal

Champion rose from poverty in Paris to great wealth and fame in both his native France and the United States. As a bicycle racer, he set more than a hundred world records. When the urban speed limit was ten miles per hour, he was the first ever to drive a mile in under a minute on a motorcycle. Following a severe car-racing crash, he was confined in traction for eleven weeks. Handicapped but undeterred, he hobbled out of the hospital on crutches and recovered to win the French national cycling championship.

Champion invested his prize money to become a tycoon in the booming American auto industry. Working closely with the leading players in this new and revolutionary field of commerce, he amassed thirty US patents. His contemporaries included Charles Lindbergh, who endorsed Champion’s spark plugs in an ad by saying, "AC Spark Plugs kept my engine running perfectly"; Louis Chevrolet, whom Champion backed financially until it came out that he was trying to seduce Chevrolet’s wife, which led to a fight and the end of their friendship; and William Durant, founder of a "new holding company" called General Motors.

Good looking and a natty dresser, Champion was an incorrigible ladies’ man, whose many dalliances were fodder for the papers. In the end, it was a love triangle that resulted in his death under mysterious circumstances.

Illustrated with period photographs, advertisements, and press clippings, and drawing on Champion’s personal scrapbook as well as those of his family members, The Fast Times of Albert Champion is the first major biography of this daring cyclist, car racer, and early auto-industry innovator, whose passion for speed helped define the character of the twentieth century.